Gene Strother, former Vice President of Operations has been named President of Adjust U, a separate company devoted to the training and development of adjusters and claims professionals, also owned by Meadows and Story. Strother will continue to serve Mid-America as Vice President of Communications & Development.

With more than 40 years in public speaking, teaching, mentoring, and communications, Gene brings an invaluable skillset and a background unique in the industry to his roles in the company.

“Gene has been instrumental in introducing and implementing revolutionary and groundbreaking changes in our company’s processes,” said Meadows. “His impact on storm management, account management, quality assurance, and communications has helped to make Mid-America a gold standard company in these areas.”

When asked about the Adjust U move, Meadows said, “Adjust U is the product of Gene’s commitment to talent acquisition and development, and the training of a new generation of adjuster. Established in 2020, under Gene’s guidance, Adjust U has already become recognized as one of the best adjuster training schools in the country.”

Jonathan Rice, former Director of Training & Development, has been promoted to Vice President of Training. He will also serve as Vice President of Adjust U. Jonathan, a former public-school teacher and football coach, came into the industry in 2005, after Hurricane Katrina destroyed the Mississippi coastline and flooded New Orleans. His first role was as a field adjuster. He had no experience in any aspect of insurance at the time but quickly learned he had a knack for it – and a new path opened before him.

Jonathan’s passion for teaching soon began to play a major role in his career. The second Xactimate class Jonathan attended as a student was so confusing, he nearly walked out. He stuck it out; however, learned the program, designed a simpler approach to teaching it, and launched his own training company in March 2009. By 2013, Jonathan became Director of Training for an international adjusting company. He joined the Mid-America staff November 2020 and teamed with Gene Strother at Adjust U then, as well.

“Jonathan’s down-to-earth, empathetic, easy-to-grasp teaching style has made him one of the finest and most influential trainers in the claims adjusting field,” Strother said. “Thousands attribute their success directly to his impact on their professional growth and the enhancement of their skillset as adjusters.”

Regarding the moves at Adjust U, Owner-Partner & CEO Zach Meadows added, “Under the leadership of Gene Strother and Jonathan Rice, Adjust U has experienced amazing growth in the year and a half since we launched it.  To sustain the growth and pursue the vision as the school of tomorrow, we have named Gene Strother President and Jonathan Rice Vice President. These two have been the driving force behind Adjust U from day one. With Gene’s vision and drive, and Jonathan’s great teaching skills and personality, there is no doubt in my mind that Adjust U will continue to be the leading school in the industry. We plan significant expansion in 2023 through the addition of trainers and class offerings. Stay tuned!”

Mark Glass will continue to direct inside claim operations, while expanding his role to Vice President of Operations. Mark began his career at Mid-America as a field adjuster in 2013. He worked numerous deployments in that capacity. In 2015, he was sent as a liaison and leader to manage adjusters embedded in the facility of our biggest client at the time. For more than three years, Mark managed 150 desk adjusters for four carriers. His team processed in excess of 40,000 claims in that period.

In 2019, Mark was named Director of Inside Claim Operations. He has overseen more than 600 desk adjusters. His teams have processed tens of thousands of claims in all areas of claim settlement, including daily, catastrophe, complex, pre-litigated, and litigated claims.

“Mark brings more than experience and dedication to the role of VP, Operations,” says Gene Strother, whose former role Glass is filling. “He brings a clear vision, impeccable organization, and genuine passion.”

Meadows remarked, “The Call Center is the newest addition to our menu of client services and has already taken off. Bryan is the right person to see that it continues to excel and accelerate.”

Bryan brings more than 30 years of team management experience to his new position.

Regarding the moves, Stacy Story, Owner/Partner & COO of Mid-America and Adjust U, stated, “Hard work, working smart, dedication to a common goal, and passion for one’s craft, these things pay off both for the individual and the company. We are proud of our people. Our teams across the board have done outstanding work to get us where we are and where we want to be. The cream always rises to the top. We all want to be that cream, right?”

Zack Meadows agreed, adding, “We are in the people business, and we believe we have assembled the best team in the business. We are proud of what they have accomplished and excited about where they will take us. It has been ‘Go Time’ around here for a couple of years now. We can’t wait to see where this thing goes.”

November 30, 2021 Mid-America’s Conference 2022 | Accelerate into Great Times & Golden Opportunities, Part Four: Meet the staff that will make a difference in your career path! 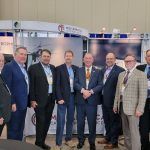 PLRB 2022 - Back in the saddle in San Antonio
All Posts